Diabetes is a common problem affecting 34 million Americans. About one in five adolescents and one in four young adults is living with diabetes, and these numbers are expected to rise as the obesity epidemic is ongoing. Between 1990 and 2010, the number of people living with diabetes in America tripled.

Statistics in the United States

In general, diabetes is characterized by inadequate levels of insulin, a hormone produced by the pancreas. Insulin helps move sugar from the bloodstream into the various cells in the body.

People who have diabetes for a long time can experience a variety of complications, including heart attacks, strokes, kidney failure and vision loss. In fact, diabetes is America’s seventh-leading cause of death.

In Type 1 diabetes, also known as juvenile diabetes, the body does not produce insulin. The treatment for Type 1 diabetes, then, is to give the patient insulin. Many people use an insulin pump – a small, computerized device that mimics the way the human pancreas works. It administers small doses of short-acting insulin continuously, as the body normally would. It also continuously monitors the sugar levels in the blood so when a meal is eaten, the pump can give extra insulin to help transport the sugar into cells where it can be stored.

Exercise is recommended for all people with diabetes, and athletes with diabetes have achieved incredible success. When people play sports, their cells require more sugar to keep up with the demands placed on the body but this is balanced by the fact that exercise actually increases insulin sensitivity. Before starting an exercise program, a diabetic athlete will need to have a conversation with his or her physician about the typical demands of training and competition. Since activity affects blood sugar levels, athletes will need to come up with a strategy to participate in sports safely while monitoring blood glucose. Activity will likely mean that the student will have to adjust his or her diet and insulin dosing, so this is a necessary conversation to allow safe and effective athletic performance.

Energy Use in Exercise

Both aerobic and anaerobic exercise are great for diabetic athletes – when done carefully. Besides improving one’s mood and heart health, exercise also aids in weight loss, makes the body better at processing sugar, and makes cells more sensitive to insulin.

To understand diabetes, it is important to understand how the body makes energy and how the muscle cells convert what the body makes into ATP – the energy-carrying molecule found in all living cells. The body breaks down the carbohydrates ingested into sugar that is absorbed into the blood. For a cell to use the sugar as energy, the sugar needs to get in the cell. Insulin transports the sugar from the bloodstream into the cell. If the sugar cannot get in the cell, such as a muscle cell, that cell cannot contract and is weak. If the sugar cannot get in a brain cell, the person feels tired and can become unconscious.

The cell’s form of energy is ATP. Cells normally have a little bit of ATP stored (enough for about 10 seconds of activity) but soon rely on the body to break down sugar stores, increasing the amount of glucose in the blood, which is then brought into cells, and converted into ATP. This form of ATP production only lasts a few minutes.

If the exercise continues, the body then shifts to longer lasting forms of energy production, such as proteins and fats which are broken down into sugars, that again need to be brought into the cells to be converted into ATP. This form of energy production can last for hours and is the most efficient form of metabolism.

After exercising, the body works to replenish the stores of energy that had been depleted.

While athletes can and should check their blood glucose levels regularly – typically one hour before activity, 15 minutes before activity, and then at 30- to 60-minute intervals as needed – there are insulin pumps that can check the sugar level and adjust the amount of insulin given automatically. There are two broad kinds of pump systems – those with a tube and those that are tubeless.

In general, insulin pumps should be padded and securely attached to the body or removed (if possible) during contact sports and the pump site be protected with a dressing or a pad. Waterproof pumps are available for swimmers.

Neha P. Raukar, M.D., MS, CAQSM, is an emergency medicine and sports medicine specialist at the Mayo Clinic in Rochester, Minnesota, and a member of the NFHS Sports Medicine Advisory Committee. 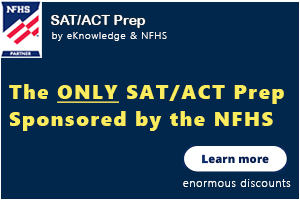 The Baseball Rule: Liability to Spectators for Foul Ball Injuries

The Importance of Building a Brand in High School Sports Programs